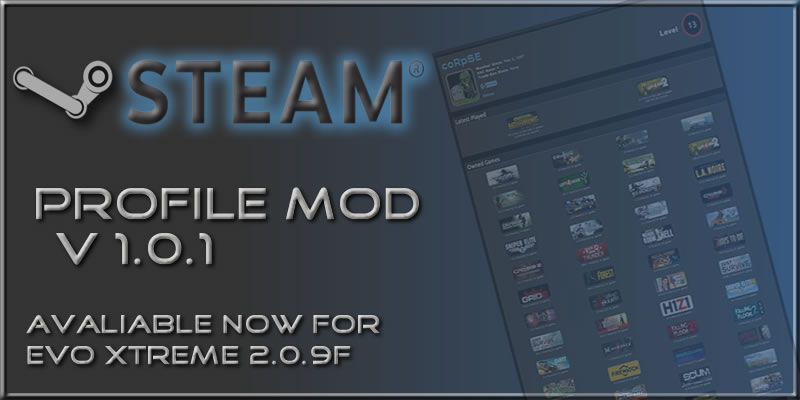 Well, after testing it for the past couple of months, not only on my site here, but on a few others, I believe I have all the kinks worked out and it is now running smoothly.
With this version, some major improvements on speed as been implemented. Using a new cache base, this system now limits how often it needs to update from steam, thus making far fewer calls than it was before. Several changes in the looks have been added to improve visibility and ability to read.

Just note, this version will ONLY work on Evo Xtreme 2.0.9F. Will NOT work for any other versions due to the caching system.
If you were running a previous version of this system, version 1.0.0, then you will need to reinstall. If you were testing this newer version on your site, there are a few of you, you will need to just upload and overwrite the files you have. You shouldn't need to do any edits of the files. (Clearing site cache and browsers cache recommended).

I have been doing some edits to the system adding in a few new features. This will be out in the next release. You can see the changes on this site and soon will be looking for volinteers that would like to use the update before it gets released. More on that shortly. But here are the new features of the system.

You can see the block working on the home page of this site and you can also see it in .

just making sure before i give it ago
[HSX]coRpSE
#7125

votes: 6
I don't really know if it will. I have not tested it.

I just did a test and it does, (sort of). There are some things in his theme that is conflicting with a few things, also, the edits for the theme are different. I did sort of come up with the placement for the forum button, but, until the issue with the conflicting CSS gets fixed, I would probably not use it. Every other theme out there, there is no issues.
PatPgtips
#7132

thanks for the info much appreciated
Lonestar
#7133

I will install this on my test site later today and see what the problem is.

Have tyied both ways with this code.

Are you running this on a localhost? It could be the settings for "allow_url_fopen" are setup incorrectly or just not enabled.
zardos
#7138

Hi m8, allow_url_fopen is enabled, i wil go through it again see if i missed anything