Years ago, we had a system that we used on our site that allowed us to give out prizes on a bases on who was left at the end. Many would enter, and one would win. It was all automated so there wasn't any bias on picking who won and who didn't win. The way it worked was like this. You set a lotto start date, Lets say, if today, was Monday the 1st, and I wanted the lottery to start on Monday the 8th and end that Friday, the 12th, I would set the 8th as the start date and have it run for 5 days. That would give users one week to register for the Lotto. Com Monday, the 8th, the lotto would close down the signups and each day, depending on how many people signed up, it would remove X amount of users each day till the lotto closed and you would only have 1 left. Yes, we had a countdown on how many days, then hours, then minutes, then seconds were left because we had people that would spam F5 just to see if they won.

Well, it was a great system and we used it alot. It's been years and I found the script. But after looking through the coding and how it was set up, I figured it could use a MAJOR overhaul. Well, instead of updating the code like I normally would try to do, I figured I would rewrite it from the ground up. The original system was designed to work with several other systems and lacks any structure, and was really poorly written by today's standards. But I am guessing back in 2006 when the original was written, it was acceptable.

I only have just started working on it, and it's not going to be a full time coding of it like the Discord module, ECalendar, or some of the other systems I have done, but more of work on it here and there. I will try keeping this post updated, and when I have some areas further along, I will get some screenshots for you guys to see and make suggestions. When I am done, I will be looking for some volunteers for testing. The testers I will be looking for are those that have members on their site and can give tangible critical feedback. If you think something could be done better or more options you like to see put in, I want to hear it and if willing, I'd like you to come on TS3 and talk to me since I usually can get a better understanding when we talk.

Well, here is a list of what I have planned.


Other things I have been considering are as follows.


Let me go into a bit more detail on what I was saying about the percentage system. Lets say I won this past weeks lottery and you allow for the winners to enter into the next lottery. Well, lets say, there are 9 others that sign up with me for the lottery. well, normally, my odds would be 1/10, or 10% chance of winning. Well, let's say you set it so I would have a 50% handicap. Now, I would only have a 5% chance of winning and everyone else would have a higher chance of winning.

I have not worked out how that system would work, (code wise), so it's just a idea that I may add in after I have all the other functions done.
Overall, what it comes down to, is the idea and the spirit of the original will be in this system, but that's about it. This will be a brand new system. Though it is not necessary, I will still give credit to the original author, Matt Palermo, for the basic concept of the system.

I have done some changes to how the system may work. you may see above some crossed out text. Well, to know more about that, check out this post.


Here are some screenshots of what I have done thus far. Images uploaded 4/21/2019 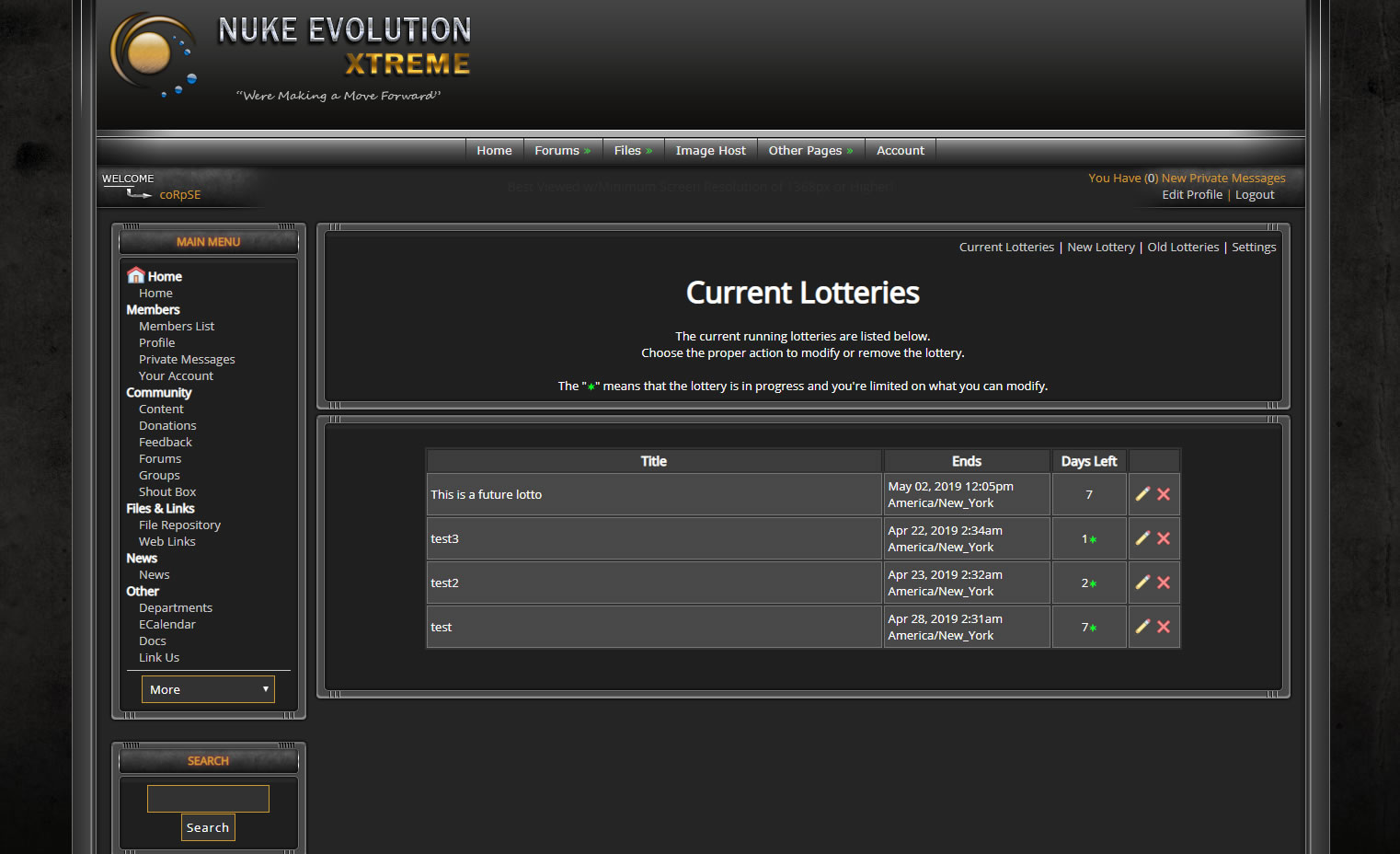 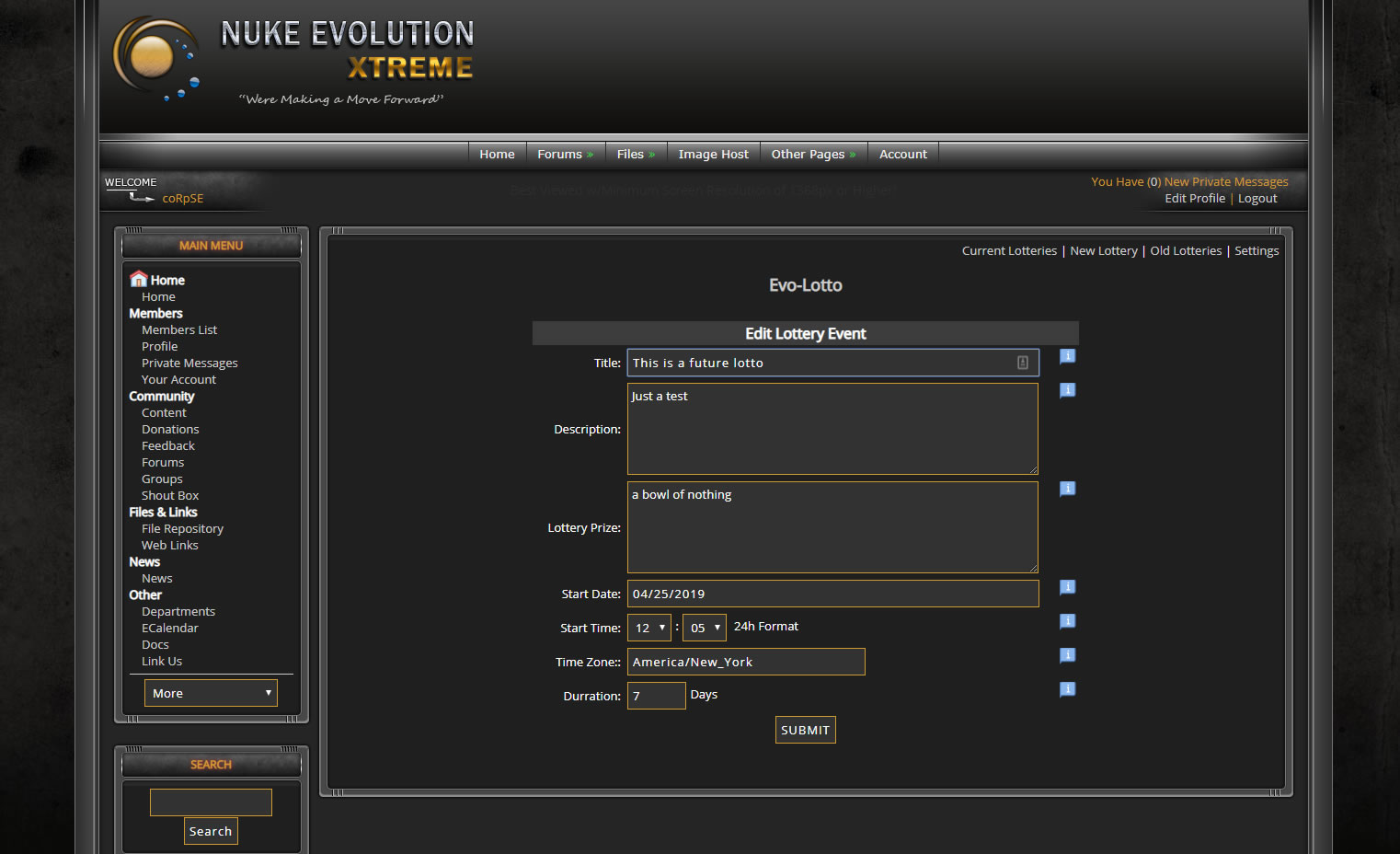 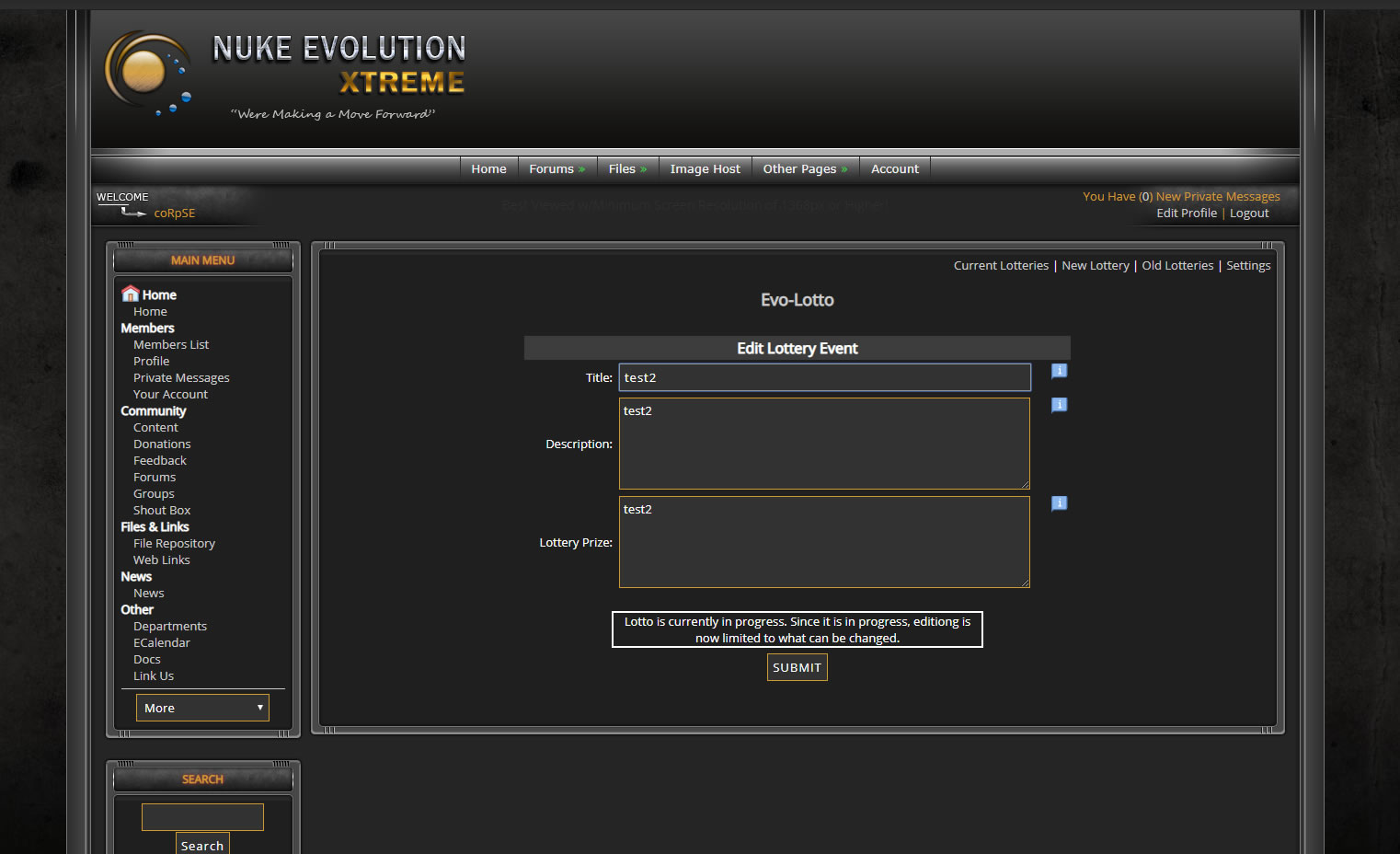 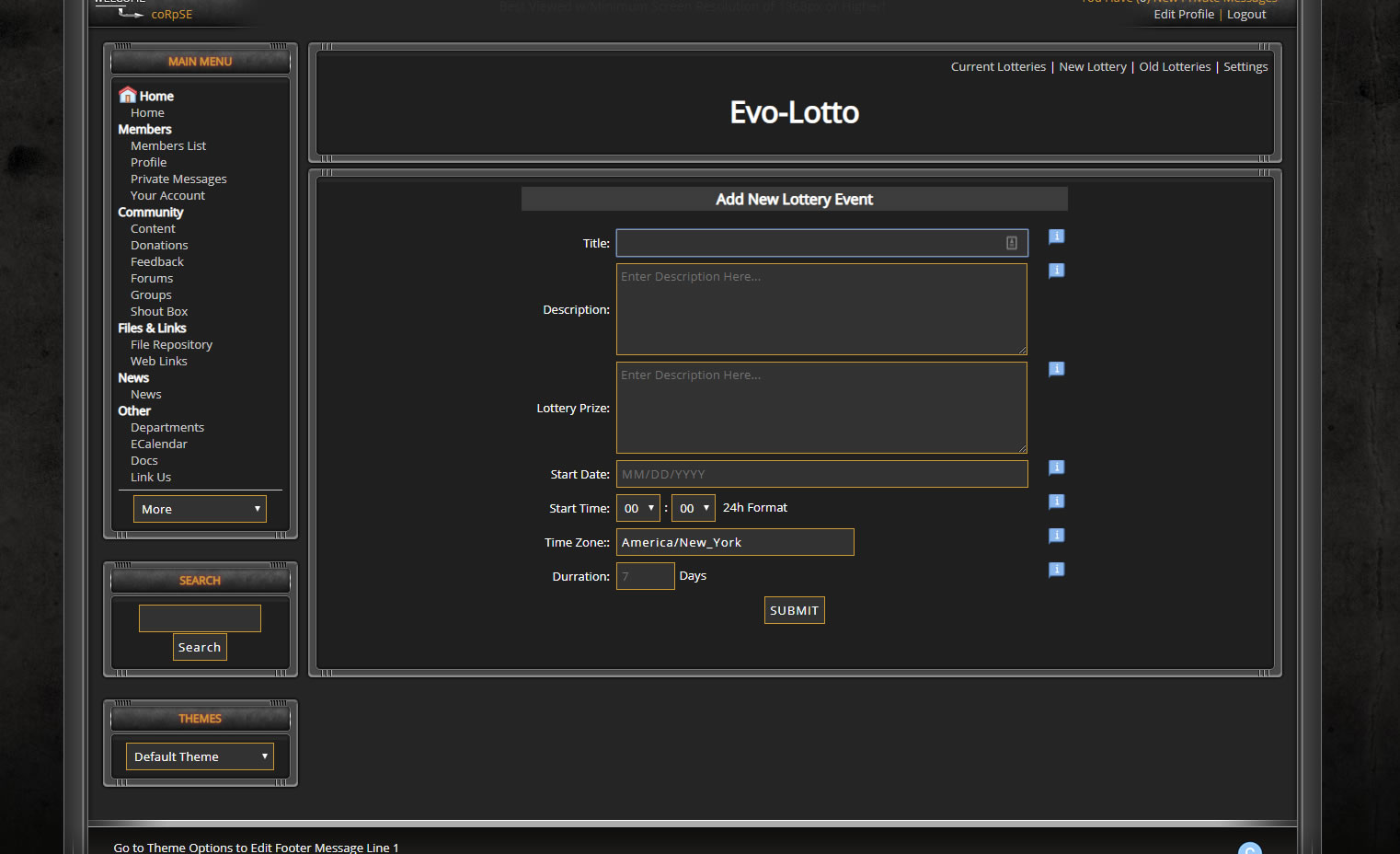 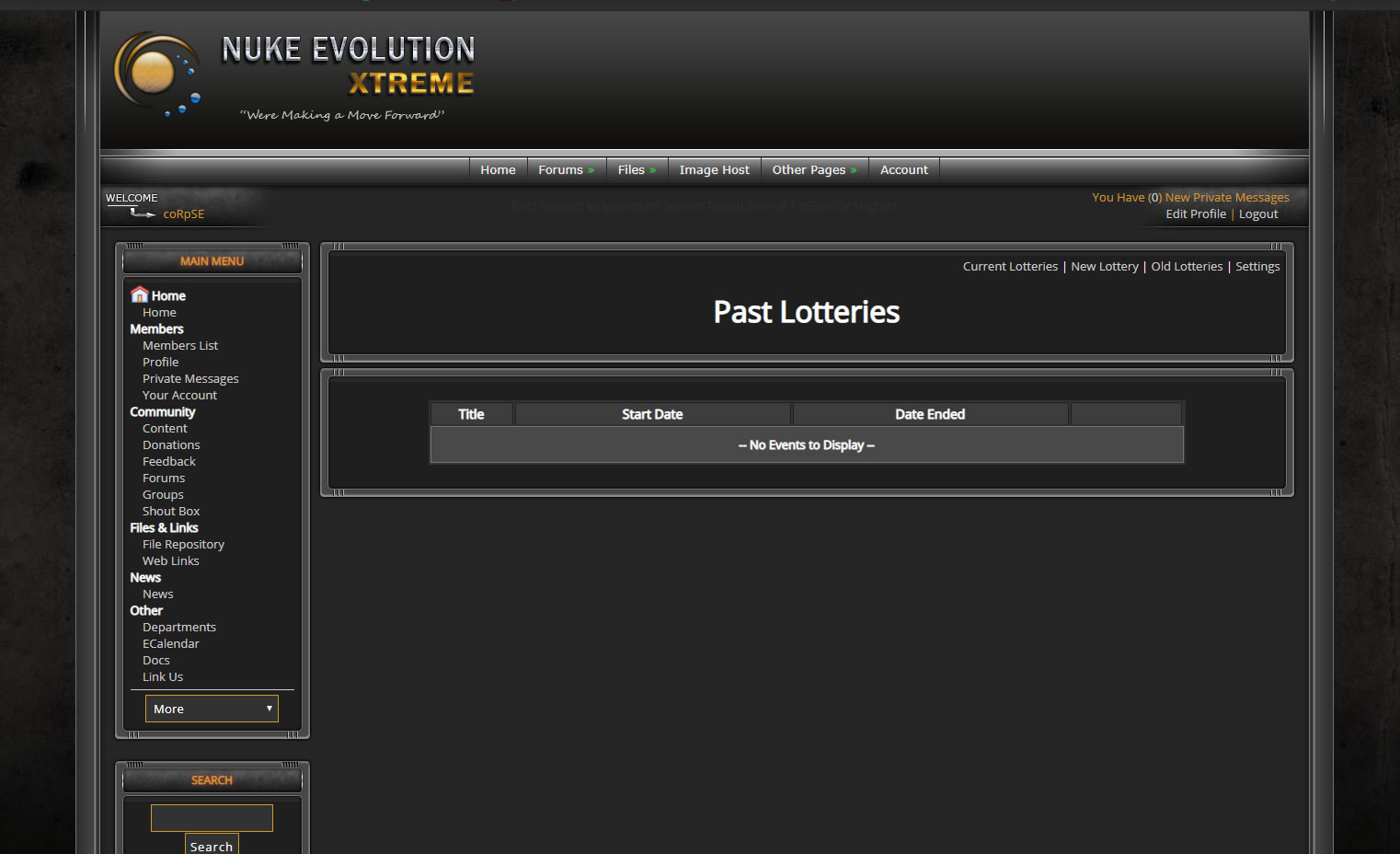 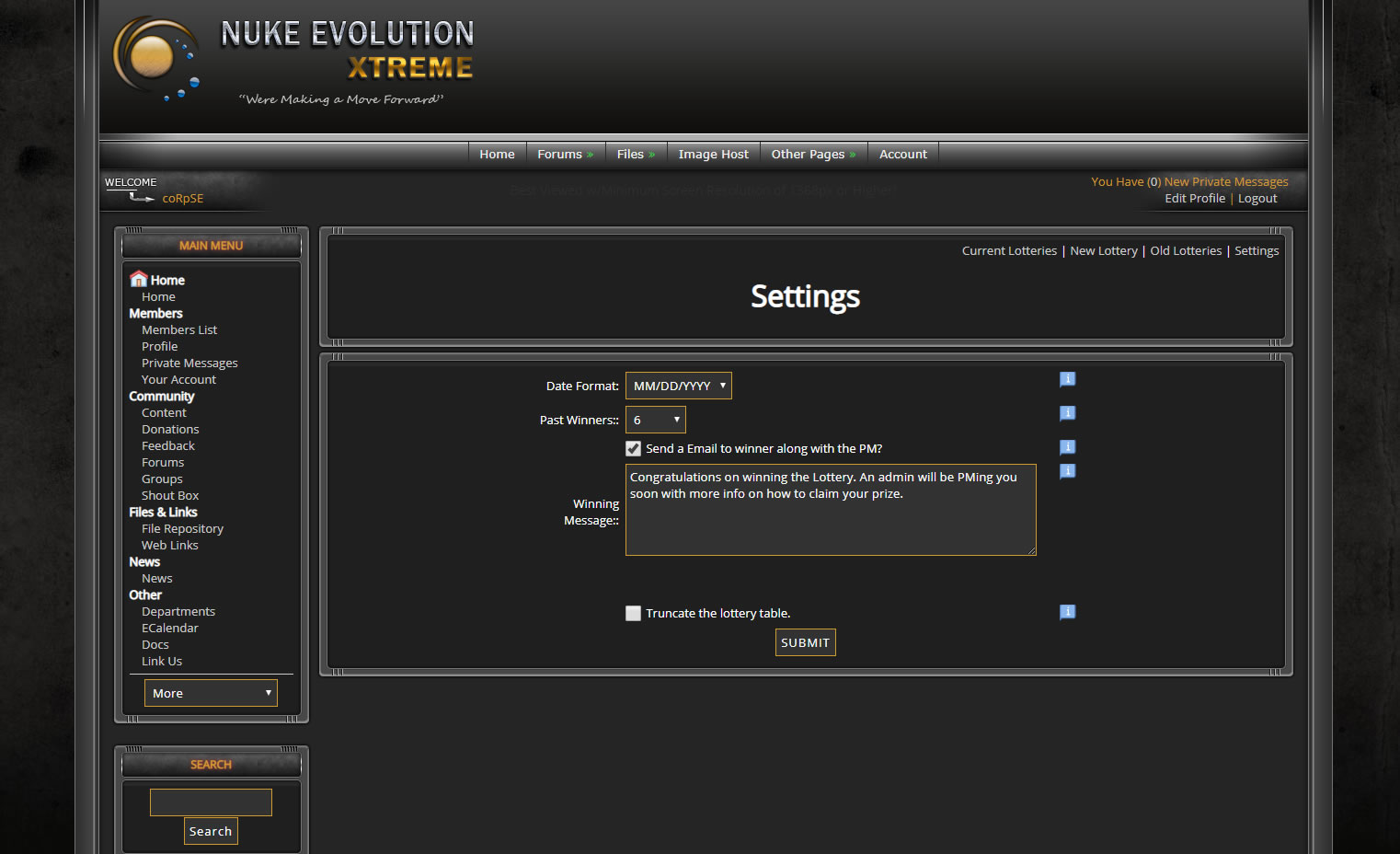 I am super excited to have this on our site! and REALLY like the ideas you have for it, from our previous conversations! I would be willing to put this through a test run! and you can count on me to come to TS to talk with you about it! Let me know if you need anything!

votes: 6
Update, I have removed the 3 ways to be able to enter into the lottery due to several reasons. The biggest is it automatically opting people into something they may not want to be in. What is this, Facebook? We don't want to have the chances of putting people into something they don't want to be in. That was my biggest concern when I was thinking about it last night. I just wished I thought it about 2 days ago because I already coded most of that system just to remove it and trash it. The other reason why it was removed was simple because of the first option of having everyone entered. What if you have a site like mine that is several years old, and have people registered that are not active anymore, or may just be gone, taking up slots for those that actually want to win. Because of those reasons, it's a pretty good idea not to have them and that's why that option is being removed. I am about 50% done as of now and it's coming along nicely.

Another change I did was build in a checker to see what your site is set for the timezone because didn't want to repeat myself over and over that the time you input is based on your server time and not your location. So by displaying the servers timezone gives you a better idea on what time the lottery will end. Now, you can change the server timezone pretty easily if you have access to the php.ini file, if not, you should be able to contact your host. If your host says they can't, because your on a globalized php.ini file, then I would recommend switching host for it shows that they don't know how little they know about setting up a server for hosting.
[HSX]coRpSE
#6921

votes: 6
Okay, I'm sorry for not posting updates on this, but that's because I was doing what I do best and procrastinate. Well, about a week ago, I picked up on the system again and been working on the front end of the system, I got the design I want done, and I most of the coding done. I still need to finish the registration and the system to show who's left and what not. I have also been considering building into the system a way where you can set a date to start the registration & lotto, (which would also be the end date of the registration, and the end of the lotto. With that, I also have been looking at setting the system up so you can't run multiple lotteries at one, instead it would only be 1 that can run, but you can have registration available with multiple at a time.

Overall, so simplify my rant there, Only 1 lottery can run at a time, but registration can over lap each other.
Let me know what you guys think.
[HSX]coRpSE
#6922

votes: 6
Well, I figured I will show you where I am at, so you don't think I am BSing any of you about working on this, here is a sneak preview of the front end.

What this week's goals are:


There is probably more, but this has been playing with my mind a bit. I am trying new things I have never done before, so learning and coding is a bit slower.

I also wanted to point out to read the post above and if you have any suggestions or comments on the above post, let me know.
Last edited by coRpSE on Wed Dec 11, 2019 5:47 pm; edited 1 time in total
[HSX]coRpSE
#6923

votes: 6
Here is the final look. Changed my mind on the old look.

I like the look of this New sleeker version. Keep up the Good work

votes: 6
Thanks, The look has change a bit since the last video. Right now, I am testing the auto removal system, the problem with testing it is that it takes 24 hours to see if its working. While im waiting, I have been working on some new features that the old one did not have. Once I can confirm that its properly remove people at random, then I am going to look into modify the backend a bit. I think I am going to go through with adding in a "Registry Start Date", "Lotto Start date", and "Lotto End Date". That will require me to rewrite a bunch of the functions and the backend, but might as well do it now rather than later.
[HSX]coRpSE
#6926